At the Aresty Undergraduate Research Symposium on Friday April 24, 2015 Aya Sakar ’15 and Kelly Jin ’17 presented 2 projects they have worked since September 2014. Both projects explore different aspects of the history of Douglass College.

Aya’ project Perspectives on Diversity and Multiculturalism on Douglass Campus, from the 1920s to the 1950s identifies women of color from Quair yearbooks and track their post-Douglass years with the archival material from the Associate Alumnae of Douglass College and other sources. The majority of women became teachers and librarians. Although most women were from from New Jersey, there were international students from Japan, Egypt, India, China, and Iran. This project received one of the three honorable mention awards in the Humanities Category. 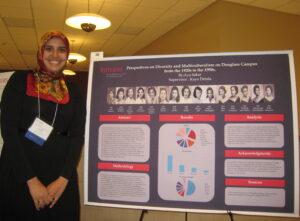 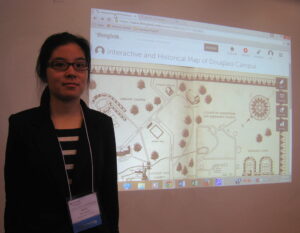 This is a guest post by Peregrine MacDonald, a Rutgers MLIS student and information assistant at Douglass Library.

We are pleased to announce the winners of the 2015 Margery Somers Foster Undergraduate Multimedia Award. We invite all members of the Rutgers Community to attend the fifth Annual Celebrating Creativity event, where the awards will be presented. The event will be held on Thursday April 16, 3-5PM, in the Mabel Smith Douglass Library on the Douglass campus.

The undergraduate multimedia award acknowledges the creative use of university library collections in the production of a multimedia-based research project focused on women’s or gender issues. The Libraries are pleased to recognize five projects, including two award winners, an honorable mention, and two finalists. The two award recipients are:

Lauren Caputo, a senior majoring in communications, won the award for her project “Becoming Syd” a short documentary about a transgender-queer relationship that explores how these relationships can help shape identities. It was created in the course Directing the Documentary (spring 2014) taught by Ross Kauffman, an Academy Award winning documentary filmmaker.

Several students taking the Rutgers-Camden courses Gender and Sexuality in Literature, taught by Ellen Malenas Ledoux, and New Queer Cinema, taught by Dawn Walsh, won the award for their project “It Gets Better.” The project was conceived as a grass-roots version of the Internet-based social activism with the same name. It offers specific suggestions for how LGBTQ+ rights can be furthered on both interpersonal and policy levels.

Michelle Muska, a senior majoring in Environmental Policy, Institutions & Behavior, and Antoinette Gingerelli, a sophomore majoring in Political Science & Women’s Studies, will be recognized with an Honorable Mention for their project “The Role of Local Action: Birthing Kits and Maternal Mortality.” The project proposes local action to reduce maternal mortality and unsafe birth in conflict and crisis areas. This was a social action project for 2015 Douglass Global Summit and the Douglass Friends of United Nations Population Fund (UNFPA) advised by Margot Baruch.

We would also like to recognize the two other finalists. Dara Harvey, majoring in public health, submitted the project “The Role of Women in Fairytale: Happily Ever After?” created for the Creating Writing course. Amy Ho, majoring in cell biology and neuroscience, submitted the project “Police Brutality Against People of Color,” created for the Introduction to Multimedia Composition course. Chris Rzigalinski is teaching both courses this semester (spring 2015).

This year’s awards were made possible in part through the support of Dr. Irene Gnarra.

More photos from the event are available here.